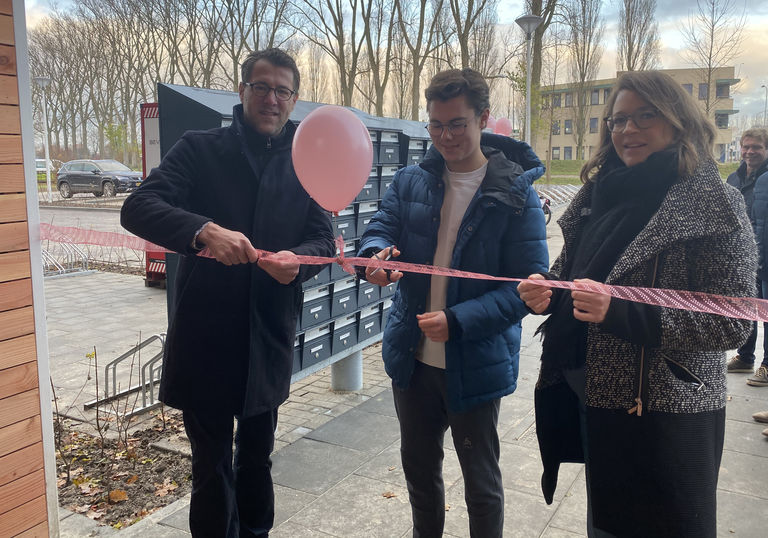 Today, the first new tenants at the Nieuwe Kanaal student complex were given the keys to their rooms. To mark the official opening, a ribbon was cut by Anne Janssen (Municipality of Wageningen councillor), Bart van As (Director of Idealis) and the first tenant.

“Nieuwe Kanaal is an excellent example of how we are continuing to look for opportunities to accommodate students in Wageningen,” says Bart van As. “As, in this case, the complex is a temporary new build for a ten-year period, we were able to complete it in a relatively short space of time. That means we can accommodate a large number of students who are looking for a room in Wageningen all at once.”

In total 312 students will live at Nieuwe Kanaal
The temporary new build Nieuwe Kanaal comprises 312 single rooms, each with its own kitchen and bathroom. All rooms are furnished (with a bed, mattress, desk with chair and wardrobe). The complex is made up of prefabricated, modular residential units, finished on the outside with cladding to give the building an attractive appearance. Although this is a temporary complex, considerable attention has been paid to the design. There is a large courtyard and sufficient parking for cars and bicycles. The complex consists of four floors and does not have a lift. A central washing-machine area and a fully equipped meeting room have been provided on the ground floor.

Energy-efficient living
Nieuwe Kanaal is a gas-free complex. An array of 568 solar panels has been installed on the roof and will supply around 160,000 kwh of electricity. The student rooms are also equipped with an electric heat pump that provides both heating and cooling.  At each end of the building, on the Kortenoord Allee side, large images have been incorporated into the façade. These depict poplar trees – a tribute to the poplars felled along the canal.

The Nieuwe Kanaal new-build project will officially open in the spring.